Many pilots were asking how they compare to each other. So here is what i think. This is my personal opinion, built from around
a few hundred Bantam flights and about 100 flights on all sizes Kode P.

Important to understand, they are about the same size. The Bantam 14 has a flat area of 16.6m, the Kode exactly 16m. However the projected area,
the Kode P has 14.35 where the „bigger“ bantam has only 14. This is because the Bantam has more arc than the Kode P.
The Bantam has also less aspect ratio with 4.4, where the Kode P has 4.75. Cells numbers are about the same.
The weight is also the same on both wings. I measured both and they seem correct. They both use the same D10 fabric, which is very slippery due to the silicon coating. Thats why both wings come with pins to pin them down to the snow when needed. The good thing about this fabric is that it’s amazing airtight for a very long time. Niviuk uses unsheathed but still colored Kevlar lines everywhere, Nova use the sheathed dyneema lines. It’s important to understand that a wing with less aspect ratio will also have shorter lines as a result. I personally prefer the kevlar lines since you never have to give your Kode P in for a retrim. But most pilots will prefer the sheathed lines from the Bantam. They are easier to sort, more durable, shorter and harder to snap in rocky terrain. Both wings have normal proper risers from black webbing, not dyneema strings, which i personally really like. The Kode P has Nitinol rods, which i really like, since you don’t have to care at all when packing. I have seen some Bantams with ugly bent rods. I also bend mine to pack it really tight, but not for more than a day!

Both wings have pros and cons. The Kode P seems to inflate a little faster than the Bantam in general, but both do really well. The bigger projected area and the more aspect ratio of the Kode P lead to more lift on take off. So on a no wind or tail wind launch, you clearly take off sooner with the Kode P. But in stronger winds the Bantam is clearly easier to handle due to 3 facts: Less aspect ratio, no overshooting at all and the brakes control the whole trailing edge equally. The Kode P doesn’t shoot neither, but it can come up a little quicker than you like sometimes. Since the brakes of the Kode P are not pulling the trailing edge down equally (they pull more the tipps) and the bigger aspect ratio make it noticeably harder to control in stronger winds. This is clearly where the Bantam shines out. I haven’t found any easier paraglider to launch in strong winds than a Bantam. It just comes up and waits for you. If you want to fly from a rocky summit without much space to take off, the Bantam is clearly the toy for it. Nova says thats exactly what they aimed the Bantam for. It’s a wing for experienced pilots and mountaineers.

The Kode P with more aspect ratio and more projected surface has noticeably more glide than the Bantam. Both wings fly surprisingly well for their size and i think this little extra glide is totally unimportant for most pilots. The Bantam flies noticeably faster, also when pushing the speedbar the Bantam is also faster. As soon as you turn, the Bantam looses more hight. So if you want fly proxy, (which Nova doesn’t recommend) the Bantam works more easy for this. If you want to soar or even thermal, the Kode P clearly works better for this. The Kode P has more roll than the Bantam, which many pilots seem to like. It also takes less input for a turn on the Kode P. But the Bantam has more Gokart feeling with the shorter lines. Barrel rolls are faster on the Bantam. The Bantam feels closer to a speedwing than the Kode P which feels more like a very reactive „paraglider“.
it’s important to know both wings have a similar issue: The narrower your chest strap of your harness is (distance between carabiners), the more roll both wings have. The Kode P always rolls a lot, for some pilots maybe too much with some harnesses. The Bantam can be fairly roll stable when flown with a very wide harness, but can also roll a lot with a narrow harness. It’s crazy what difference that carabiner distance makes on both of those wings. Same thing with the bigger sizes Kode P and also with the Doubleskin. When flown the Kode P with a narrow harness, it can make a stable spiral where you have to exit actively (at least size 20 and 22). I haven’t tried yet with the Bantam or Doubleskin and with the Kode P 16 / 18. It’s important to understand that on the En-Certification all wings must be flown with a seat board harness with a given carabiner distance, depending on the weight range. (https://lu-glidz.blogspot.com/…/ein-en-ist-ein-en-b-ist… ) Given that nobody flies a Kode P 16 or a Bantam 14 with a seatboard harness, you can get very different results in some maneuvers than what they got at the certification.
The Bantam 14 and 12 are En-D, the Kode P 16 is En-B up to 70kg, does that mean it’s a safer wing? Very hard to say. Important to know: The Bantam is EN-D since it was certified using folding lines, which made it automatically an EN-D. Nova assumes otherwise it might also be an En-C like the Kode P when loaded more. Pulling collapses with both wings, you can get very different results with the slightest variations. You can scare yourself with every wing when pulling asymmetrics and it’s very difficult to make a fair point here, especially on miniwings! One thing i noticed after writing „the Bantam warning“ is that there are many other miniwings that react more aggressive to asymmetric collapses than a Bantam….!!! If you pull some collapses on both wings, you notice very quickly; It’s very hard to pull a big collapse with a Kode P, there is a lot of pressure on the A-Lines. More pressure than any other miniwing i have flown before. Niviuk designer Oliver Nef says that wings with more lift in front tend to be me more collapse stable. In fact it is really hard to get a collapse with a Kode P, even on speedbar it is very stable. Is it more stable than the Bantam? It feels so. But i can fly active and i have never gotten the smallest collapse on a Bantam neither. I do think now (after pulling lots of collapses on may diffrent miniwings) the Bantam doesn’t react more agressive to asymmetrics as any other miniwing. Maybe it does collapse slightly easier, but thats really just a guess. The Bantam is simply by far the most flown miniwing in the alps at the moment, so that might explain those few incidents i heared about. Wherever you go, you see Bantams flying around, many of them by unexperienced pilots. It’s important to understand that every small paraglider will turn away quickly after a big asymmetric. But most brands don’t even make such small sizes of their wings…
I don’t want to rate safety too much anymore, it’s just too many factors involved and too complicated. But one thing i can say; I personally feel better in turbulent air on a Kode P. The lines are longer, which already gives you a safer feeling in turbulences. Especially on the bigger sizes Kode P, i feel really safe, even in the strongest thermals without a reserve. I was once soaring the Moustache 18 in quite turbulent 50km/h winds and then tried the Kode P 16 and was totally surprised how safe i felt, it didn’t feel this turbulent anymore.
Both wings you can control really well on the C risers when flying on speedbar. The Kode P feels a little bit like a 2-liner without performance when flying on bar:-)
Brake travel:
Both wings are hard to stall and clearly warn you by become hard on the brakes down there. The Bantam stalls at once, where the Kode P looses the tips first. Many other wings in this size have shorter brake travel.

The Bantam clearly makes more lift when pulling the brakes, i assume it is because of the brakes pulling the whole trailing edge at once and the higher trim speed. You can still slow the Kode P down well, but if you try landing uphill like the X-Alps guys, it’s clearly easier on the Bantam. I think the Bantam has the best flare of all small wings i have tried so far. Even the 10m Bantam you can slow down really well.
Conclusion:
I’m a big fan of both wings. The Kode P doesn’t replace a Bantam at all. But i think the Kode P will attract more pilots, since no wind launch is easier and it feels better in turbulences. To me the Kode P is more a hike and Fly wing, where the Bantam really shines out as a Climb and Fly wing or miniwing. I still stick with my saying that the Bantam is the easiest miniwing i have ever flown in calm air. Easy take off in all conditions, moderate roll and very easy to judge sink in the turns combined with the best flare make this miniwing really easy to land, even for miniwing first-timers. In turbulent conditions i think the Kode P needs less active flying and can also be flown by less experienced pilots.
Niviuk also plans to release the Kode P in 14 and 12m. Certification or not isn’t clear yet. On the bigger sizes the Kode P works really great for thermaling, it really gives you a super safe feeling and feels almost uncollapsible. That’s why Niviuk will release the Kode P also in a heavy version as a durable beginner wing, named Wilco.

And now choose your gear: 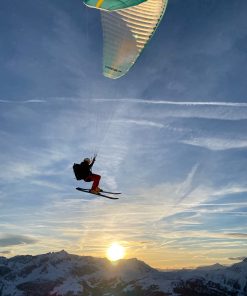